We are concentrating our full ability on the field that we know best and can do best.

We will continue to research and develop electromagnetic interference and thermal conductive products, and we will give you the best quality products.

Now it’s time to take a close look at a small but competitive business making a difference for the Korean economy. This week’s spotlight is on E-Song EMC, the recipient of the Best New Product award at the 2014 Korea Electronics Show. Winning the Best New Product award at the KES means that its innovativeness has been recognized by both consumers and fellow businesses. Here’s Mr. Nam Yun-su, head of sales at E-Song EMC, to explain the company’s flagship product.Our product uses a different, more creative thermal structure than existing products. Conventionally, silicone thermal pads and heat sinks are combined and used as a thermal interface material in electronic goods. But thermal pads tend to be thick due to limitations in the materials and emit regulated substances. Our TFG or thermal foam gasket has not only overcome the limitations of conventional thermal pads but also changed the decades-old thermal pad designs. E-Song EMC’s new signature product is the thermal foam gasket. A gasket is a component that prevents the leakage and intrusion of electromagnetic noises by stopping up the electromagnetic gap. Gaskets are an essential part of electronic devices, but their positioning and thickness were limited due to the way thermal pads are assembled. E-Song EMC’s new TFG, however, is made with highly heat-conductive graphite, the surfaces of which are covered in a thin film to shape it into a gasket. Thermal foam is a new product that quickly delivers a lot of calories to the thermal pads. It comes in various sizes and shapes, so it can be attached anywhere and does not have a thickness limit. E-Song EMC has certainly provided a new paradigm to electromagnetic wave shielding components. We can’t help but be curious about what kind of company E-Song EMC is. E-Song EMC was established in 1991 and started specializing in electromagnetic shielding components in 1998. All electronic devices emit electromagnetic waves. We prevent these microwaves emitted from other devices from affecting our devices, systems, or equipment, and vice versa. That is what electromagnetic shielding is. We are contracted to do business with leading companies in Korea and also export to various countries around the world. First established as Shinah Trading Corporation in 1991, the company was renamed E-Song EMC in 1998 as it built a new factory for microwave shielding components. The letter “E” in the company name is pronounced the same as the Chinese character meaning “benefit” and the character “song” means “to send.” So the name E-Song EMC implies sending benefits to customers. Having transformed into an electromagnetic wave shielding specialist, E-Song EMC focused its efforts into developing technologies for protecting people and devices from harmful electromagnetic waves generated by household appliances like televisions and refrigerators to cutting-edge IT products like smartphones and tablet PCs. As long as electronic circuits exist, electromagnetic shielding is a must. The need for protection against the harmful rays grows as we are exposed to more electronic devices. Korea didn’t have the technologies enjoyed by advanced economies like Japan and Europe. So our company localized the technology to suit domestic circumstances and help take Korea to another level in IT development. In order to do so, E-Song EMC founded a research center to conduct tests and experiments to meet various international standards. Now there are about a dozen researchers working hard at our center and about 10% of our annual revenue is re-invested into R&D projects. E-Song EMC opened an in-house research center in 2006 to achieve the goal of producing all shielding products locally. The company took part in government-sponsored projects to augment its technological development capacity, and finally succeeded in developing its own array of microwave shielding components. Such hard work has helped replace the costly shielding components imported from Japan and the U.S. with the ones locally produced by E-Song EMC. One of the merits of E-Song EMC products is that it is technologically flexible, which means the company is technologically capable of producing materials tailored to customer specification. 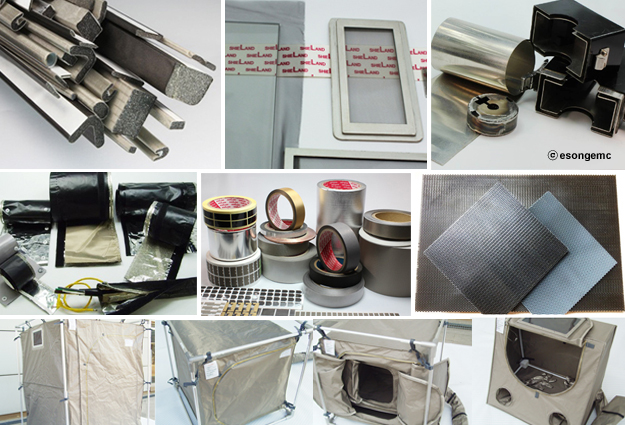 Many competitive Korean companies are getting rave reviews from overseas. I believe we are such a company. Our key export customers include the U.S., Canada, Japan, China, Taiwan, Singapore, Germany, Turkey, Poland, Israel, Russia, and France. Our customers tell us that we offer competitive prices without sacrificing product quality or performance. This may be why the volume of overseas business transactions is increasing sharply every year. Robust export of E-Song EMC earned the company the Million-Dollar Export Tower award in 2012 and its wide array of products grabbed the attention of foreign buyers at the recent Korean Electronics Show. But never a company to be satisfied with status quo, E-Song EMC is striving to develop new products for the EMC market, which is certain to expand even more with the advent of more sophisticated electronic devices. Judging from the thermal foam gasket it showcased at the electronics trade show, E-Song EMC has certainly proven its capacity for innovation and future potential.